Marketing your Romanian talent to a UK company 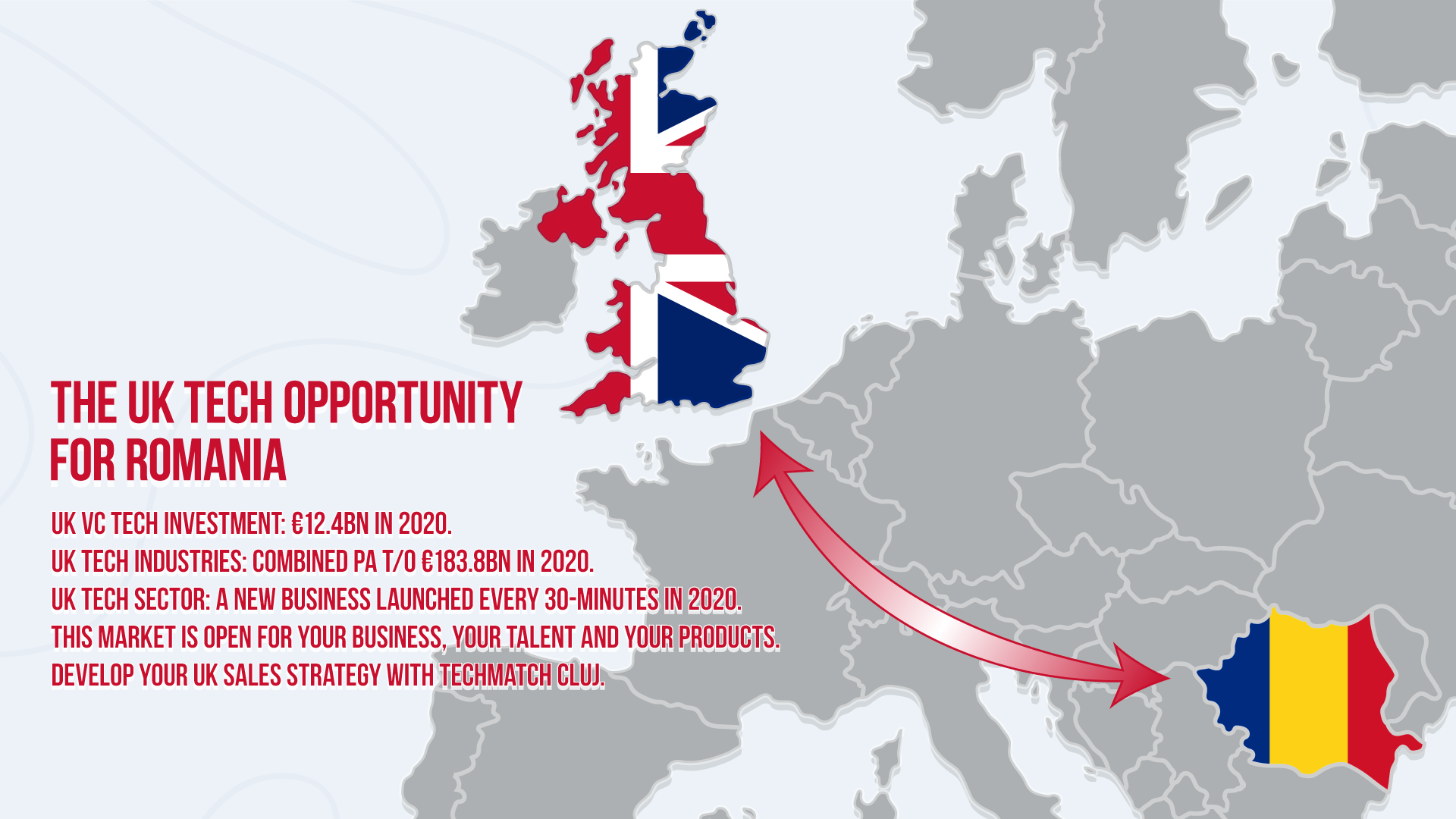 Thank you! Your submission has been received!
Oops! Something went wrong while submitting the form.

10-minute read: How Romanian Tech can succeed in the UK

(If you enjoy this, make sure you Register to our webinar on Thursday 6th of May, 19:00 CEE)

WEBINAR - How to achieve webcam success: keeping businesses engaged on your call

‘Do not confuse the behaviour of British reserve for the lack of enthusiasm to your proposal’!

This is the fifth of six articles about success in the UK economy. The writing has been sponsored and developed by Techmatch, Cluj, Romania in association with the Barclays Eagle lab C4DI, Kingston-Upon-Hull, UK.

Success in the UK economy is described as:

Our articles will equip you for success in the UK

Bob: In this article Valentin and I explore two stereo types referenced as British reserve and British politeness. This is how to:

These two stereotypical British behaviours can prove to be problematic within the context of developing a business deal. So, we started by exploring the impact of British reserve.

This topic was developed through a series of lengthy conversations that Bob and Valentin held with regards to the differences between US and UK culture.

Valentin: The Tech sector has an Americanised vocabulary, and the West Coast of the US has an incredibly significant influence on how we communicate. You might describe Tech conversations with the UK having a default position to use the language of the Silicon Valley.

Bob: As you can see there are UK and US areas within the above model that are exceptionally similar. You can also overlay on to this theory that it is likely the common language around technology between a UK lead and a Romanian lead will be rooted in the norms of the Silicon Valley. There may be a further expectation on the Romanian side that the British are remarkably like Americans.

Valentin: Bob Spence has travelled to the United States and specifically California many times on Tech business. It has been said on more than one occasion to him that Silicon Valley, rather than a location, is a mindset of innovation. That mindset to a degree does not recognise the possibility of failure. The UK Tech environment has something of that state of mind within it and if you reflect on the financial figures, you can evidence the results below.

It is the Number One revenue opportunity in Europe with a successful VC funding period in 2020.

London is an exceptional location to raise money but less exceptional in terms of available talent and scalable capacity.

The opportunity to subcontract, partner, collaborate, sell to, and engage with the UK market has more potential than anywhere else in Europe.

Bob: The best UK Tech entrepreneurs are more than capable of building companies to a standard of anything originated from the West Coast. However, there are major differences between the UK and the US, in terms of business and we will start with the use of the English language.

It may be a well-worn cliché that the British communicate with reserve whereas the American communicates with exuberance but like many clichés they are created from an underlying truth. Whilst it is reasonable to say that both UK and US entrepreneurs have similar ambitions when it comes to communication what we must recognise is that cultural norms will reveal themselves.

If you are using American sourced sales training, sales literature, sales vernacular, and have an imported US sales culture do not be surprised if this fails to elicit positive responses in the UK. At no point is any of this US material designed specifically for a Romanian speaking first class English to communicate with a British entrepreneur or procurement lead.

Even European VCs with high level of exposure to US entrepreneurs and are used to investing in the ‘West Coast style’ may not tune into a UK entrepreneurs reserved approach.

Valentin: The UK is framed and famed for its politeness. You could suggest that it is a passive personality trait. Passive, in this instance at least, does not stand for not caring or being lazy, but shows someone who wants to keep the harmony. Far from being a pushover, the British are shy of confrontation, going out of their way to avoid causing unnecessary conflict. A passive personality type is likely to be quieter than others, but they choose their words wisely and when they do speak, they are likely to say something worth listening to.

Bob Spence would say the take-out is: when the British speak, they are likely to say something valuable.

Having ‘something to say’ is more important than ‘saying something’. When you are in a meeting with a British Tech company make as much ‘listening space’ as you can for them to talk. Quite often they will not talk unless there is that space. That behaviour may be confused with having nothing to say. Within the concept of politeness, they will not interrupt you even if what you are saying has no value to them. An American is much more likely to interrupt and engage.

Bob Spence: I have discovered in business development meetings within central Europe, I have been interrupted with criticism even before I have finished. This feedback is invaluable because it allows me to understand where I may or may not fit into the needs of the prospect. I am rarely, rarely, interrupted in British meetings, so I am left with a meeting where I am not be clear if my benefit case has any value.

Valentin: Our discussion continued with questions about ‘small talk’. I was curious about the opinion of Bob regarding how much time to devote to small talk in a business meeting. Also, what are appropriate topics? Most Romanians already know that weather conditions for the British are some type of topic but what other tips were there?

Bob: My first tip is that: ‘how are you’?... is not an invitation to discuss your health and feelings! Although it is a business meeting, try to resist jumping straight into the important matters. Take your time. If the British conversation stereotype is the weather, then empathise. Advise that your weather is similar. Do not say it is worse or better but just empathise. Quickly learn the first names of the British leads on the call and use them frequently. At all times avoid politics, religion, money, or private matters.

Valentin: My next question is how to decode what the British really mean? It is confusing when they use expressions like ‘interesting’ and ‘fantastic’ when those descriptions do not meet the context of the conversation.

Bob: my experience as a South African in the UK is British people may have an indirect communication style. It is not straight forward to decode. if someone says to you; ‘I need the information to complete this proposal’ … this should be fully understood as an urgent matter.

However, if someone says to you; ‘could you provide this information’…this does not give the sense that it is an urgent matter.

I would suggest it is better to treat even the most general request for more information as an urgent matter. (Why take the risk)?

In a business development conversation, the UK lead may use understatements such as ‘that may be a bit of a problem’… where the code means: ‘this is a major barrier’.

You may suggest something that is excellent and get the coded feedback; ‘not bad’. ‘Not bad’ is best understood as acceptable and with a certain modulation of voice could even mean praise!

In terms of deal breaking be careful of the following language: ‘we will get back to you on that’ … is code for: ‘we do not agree with you at all and probably see no value in discussing this any further’!

Valentin: within your grasp of this ‘code’ what has been the standout remark that Romanians should listen out for?

Bob: quite often critical and crucial parts of the meeting will take place at the very end. It will be camouflaged by a rather vague and low-key remark such as: ‘by the way’… followed by some new comment/hint…this will then be followed by: ‘we would be grateful/that would be helpful if you could look at this’. This is usually a critical deal breaking reference! As soon as you hear ‘grateful’ or ‘helpful’ that code means investigate the subtext in detail based on the comment/hint.

Valentin: what else do you suggest that Romanian salespeople can do.

Bob: Avoid aggressive negotiation tactics and confrontations at all costs. If your British counterpart starts a sentence by saying; ‘with all due respect’…you have crossed some type of the line and will have to mend bridges to continue the discussion.

On the other hand, if you hear the words: ‘are we still on your Christmas card list’...this is code that your British counterpart may feel that they may have pressed you too hard.

You must pay attention to any issues mentioned in the comment: ‘by the way’ at the end of a meeting. Indeed, a Romanian may well be shocked to discover later that the content introduced as ‘by the way’ was the key point.

The phrase: ‘with all due respect’ may not generate a red flag either. As soon as someone British starts a statement with this I know I am about to receive key feedback.

This article is by no means exhaustive. It is part of a larger piece of work and in the next article we explore what content you should focus on within the framework of a UK business development meeting.

Bob is the Director of International Business Development for C4DI, the Centre for Digital Innovation based in the UK.  C4DI is part of the Barclays Eagle labs chain of 26 incubators. He writes regularly on the challenges of conducting business across culture and is the co-founder and business development lead of a Polish LawTech enterprise that conducts business in the UK.

Valentin is Co-founder and CEO of Techmatch a B2B Outsourced Sales and Lead Generation company. Valentin is a recognised thought leader on the subject of the growth of the Eastern European Tech ecosystem.

Why Romanian Tech should care about the UK